Can I Talk to You About a Shidduch?

As a point of reference, today is December 14, 2014. Yesterday evening, as I was busy in the kitchen preparing dinner, my phone rang. Ruthy, a shadchanit with whom I had never before spoken in my life, wanted to tell me about a man and to propose a match for me. She called on behalf of a shadchanit for whom she worked. She knew very little about him, only that he was 55 years old, divorced with three children, financially stable and successful in business and lived in Herzeliyah. So, would I move to Herzeliya? I told her that it depends on the man and that if she gives him my number, she must tell him that I will ask many more questions. I asked her where he was from and she kept insisting he was Israeli in every way.

His name was Yehuda and he wasted no time and while I was speaking with a very good friend, phoned me no less than THREE times. I asked my friend to excuse me and explained that I had to phone whoever it was back and would call her later. I had just ended the call with her and the arduous pursuer phoned me AGAIN. Dear readers, that kind of behavior is a sign of desperation. Nevertheless, keeping an open mind and giving love a chance, I took his call.

The Complete Israeli – Not Exactly

Yehuda had an accent so thick, you could cut it with a knife, betraying the fact that he wasn’t so very Israeli. I asked him where he was from, to which he replied: “Oh…if I tell you, you will hang up the phone right away!” I asked where he was from and he said “I was born in Paris, then grew up somewhere else and returned to Paris when I was 16.” I insisted and asked where he grew up and he said he didn’t want to tell me because I would hang up on him. I told him it is important and that in the same token, he could say that he’s not interested in an American princess who would make demands, etc. Even odder was that he said “The shadchanit began to tell me about you and how many children you have, etc. but I told her that it doesn’t matter, that I must hear your voice.” He went on to say:  “I feel we can succeed together. We both have to compromise a lot and I would cut off an arm or a leg for a woman to share my life. I have been very successful in business and finance but I haven’t succeeded in marriage and I hope we will succeed together.” …Readers, do you feel my headache?

I patiently explained that in the same token that my American upbringing could be a deal breaker for him, if he doesn’t want an outspoken, independent, educated woman who will want certain things and voice those desires, etc., it was relevant to know where he was raised because although there is no shame, certain cultural codes are so foreign for me, there’s just no point in pursuing a relationship.

What he does for a living

The prince of the hour bought lots, built on them and sold the properties. He studied air conditioning and was a technician for a while but hasdn’t worked at it for years. He was not college educated and I have SERIOUS doubts as to whether he had any English to speak of. We didn’t even touch that subject.

I want to humbly qualify that there is nothing wrong with a self made man but before readers from the west jump to conclusions, here in Israel, people are more defined by their occupations because they do not develop hobbies or other interests, as a rule. I also know myself well and found his manner of speech off putting and NOT something I want to wake up to every day. Having said that, I continued to ask him questions about himself.

He was quick to conclude

He finally told me that what I seek exists but that it’s likely the men who have that are married. I agreed with him. What he said next was very strange. He said that he had told the shadchanit that if she will find him his match, he would reward her generously (monetarily, that is) but that for each woman who is not a match, she must put 10 NIS into a charity box and that it seems to him that he will again gain merit for her making yet another contribution.

I’ll give him credit; the man wasn’t stupid.

Fast on the dial

I phoned the shadchanit to thank her. She answered and I heard HIM on speaker, telling her to give money to charity for trying to set him up with the wrong woman. I thanked her for her efforts and told her that I would be very happy if she would keep me in mind for future possibilities.

The Shidduch that wasn’t

I believe in shidduchim when there is thought behind them and when the matchmaker takes the trouble to get to know the parties to some extent. For a man who will not father my children, I am not going to ignore everything only to have it blow up in my face after we’re married.

This man moved SO fast, all he managed to arouse in me was suspicion and nothing more. I was put off by his voice and accent and manner of speaking but had he been charming, I might have gotten past that and moved onto other factors. He is so overconfident from what he says are his achievements in his life, he doesn’t even think he has to listen to anyone else, neither the matchmaker nor the prospective bride. All kinds of red flags went up and I personally would not waste time, energy and effort to even meet such a man. 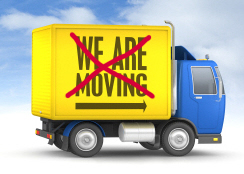 In case you were wondering, I’m not moving to Herzeliyah.