On November 26, 2018, my phone rang. This is no longer a common thing, as people today mostly text. The call was from my sister, who rarely phones, not even for my birthday or holidays. She told me that she got word of a death in our extended family. The man who passed, nicknamed Simi, short for Siman-Tov, was a 2nd cousin of my paternal grandmother. I was neither stunned nor surprised, and remarked that just a couple of days earlier I thought of him and that G-d extended his contract by very many years, as you will later read.

When Simi, a native born Jerusalemite Israeli, was a 28 year-old bachelor and I was a girl of 10, he came to New York, legally, as we all had. He found work as a building superintendent in Manhattan after living for a short period of time with Tommy, a good friend of his, who secured him a room in a building he managed.

My parents gave him a warm welcome, as they did all their relatives and friends, and he became a permanent fixture in our home, spending holidays and many weekends with us. He was invited to every party or social evening that my parents hosted.

Simi occasionally brought whichever lady friend he had at the time with him but they usually didn’t last very long. I remember one exceptional woman, Fran, an American schoolteacher, whom he wanted to marry. We all felt that Fran was also a part of the family. She hesitated at his proposal and when she finally said yes, he told her she had waited too long and that it was too late. Our entire family was sad at this news.

Simi had a strong, Sephardi-Israeli personality. He was quite handsome, with a full head of black curls, dark brown eyes, light brown skin, very intelligent. He sang, danced, liked a good drink, played cards, gambled and had many friends. Other than that, however, his life was rather unremarkable, as he worked for years as a superintendent at a luxury co-op in the heart of Manhattan. He lived there, rent free and basically responded to resident complaints by calling tradesmen to repair and maintain the premises. He himself described his job as “good for lazy people.” After many years on the job, he was injured in a work related accident, for which he sued and was awarded a sum of money.

Still a bachelor, well into his forties, he became a father with an Israeli woman of Middle Eastern descent, to whom he was introduced by mutual friends.  He returned to Israel before his daughter was born and made the fatal mistake of moving into his partner’s home, a house she owned in north Tel Aviv. She was a hairdresser.

One day, he was diagnosed with cancer of the liver. He, his partner and baby girl went to the USA for a progressive cancer treatment, after which they returned to Israel. During their stay in the USA, he married his daughter’s mother, in case he died. He wanted his daughter to inherit everything he had, no questions asked.

As mentioned earlier, he moved into his partner’s house. He told my parents that any time he would express any desire or complaint, she would tell him “If you don’t like it, there’s the door and you can leave. This is my house, not yours.” They separated, reconciled and eventually divorced.

Growing up, I admired him and knew that if he was visiting, the atmosphere would be lively and friendly. This was especially significant when we lived in Rockland County, which was a suburban car culture. From my perspective, I had one friend who lived in our housing development and an occasional second cousin who’d come up to visit his father on weekends, vacations, etc. All other friends were a car ride or phone call away.

Simi was engaging, participated in whatever we did, made conversation and, like most relatives from Israel, made me feel loved and wanted; This feeling was absent with my comparably cold and distant relatives in the USA, even with my paternal grandmother or aunts.

We usually marked his birthdays with a cake or my parents would meet up with him and we’d have a cake, either store bought or home made. One year, I bought a needlepoint canvas and embroidered a picture that I had framed and gave it to him as a birthday gift. In selecting the canvas, I thought of him. He enjoyed clubbing, gambling, drinking, smoking, dancing and women, so I chose a picture that reflected that lifestyle.

After some years, I moved back to Brooklyn and visited him on occasion. During these visits, I would see the picture hung in his home. I eventually returned to Israel, as did Simi at another time but aside from phone calls and a few family affairs, I didn’t see him.

After his divorce and my father’s widowhood, Simi moved in with my dad, at my dad’s invitation. I never inquired about the details of that arrangement but at least neither was alone and they could play backgammon (who am I kidding, it was always calles shesh-besh in our circles). The novelty quickly wore off and my dad asked Simi to find his own crib and so Simi moved back to Jerusalem, not far from his siblings.

He made it painfully clear that we were not in touch, so I did not reach out to him when he had his troubles. The last I’d seen him was when my dad was in ICU in Hadassah Ein Kerem and Simi, who worked as a security officer there, came to see my father on his break. I happened to be visiting at that time, so it was a chance meeting. I was not more than politely friendly and expressed no particular interest in Simi’s life.

Suddenly, out of the blue, I was told of his passing. The following day, I phoned the woman who told my sister of the news, to ask until when they’re sitting shiva. She told me that they’d rise the following day. To be honest, I debated, since I was conflicted. I was not inclined to pay them any respects or condolences, as none of them took any interest in me for a good number of years now, not even when I sat shiva for my parents. I also knew and reasoned that he lived until 75, which is not young for a man with such a medical portfolio.

I took a deep breath and remembered the times back in New York, when he visited us or I visited him. I remembered that his staff treated me like a VIP and that whenever I needed, I could sleep over, instead of riding the trains late at night to Brooklyn, whether he had other guests or not. Finally, on a day when I did EVERYTHING one could possibly do in one day, I drove to his address to give my condolences. His family observed the custom of sitting shiva in his home.

Simi had rented an apartment in a rundown building. It was on the ground floor but uphill from the sidewalk. I found parking and walked in. His family observed tradition and kept the door open. Upon entering, his two sisters looked at me and asked who I was. I said “I’m not telling and I’ll sit here until you figure it out.” One sister then said “You’re Chanan’s daughter!” I then replied “All the time.” We all smiled, laughed and I sat on a very uncomfortable plastic chair with a high back.

Suddenly, looking at the wall right in front of me, I gasped and exclaimed “That picture!” They asked me “You know that picture? Do you know who did it?” I said “Yes. I did!” They then asked me if I wanted it. I would have taken it, since they showed no interest. Suddenly, his daughter said she wanted it. They told her she had to ask me for it. I told her that of course she could have it and asked whether she wanted me to write her a dedication. We found a sheet of paper and I wrote her a dedication remarking that when I did the needlepoint, it was many years before she was born and who would have known that she would then have it. I wrote her that I am glad to pass it onto her and that she should always remember her dad when she looks at it and that we are tied by blood, even if we don’t meet. Dated and signed, they affixed the note to the back of the picture and hung it back on the wall.

I was stunned, to tell the truth. Not only had I completely forgotten about that picture but I was touched that he hung it front and center, the first thing anyone would see upon entering. It could symbolize so many things, I’ll let you readers find your own inferences.

Thank you for reading. 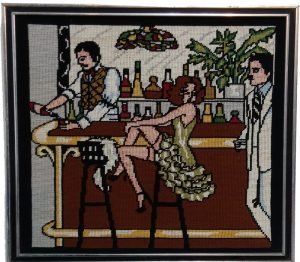 Needlepoint I gave Simi as a gift.

* This story is a more detailed version of a post featured on another site.